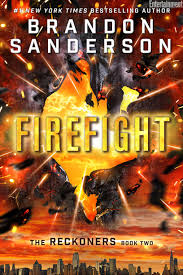 Let’s start by saying that I read pretty much anything that Sanderson puts out.  This includes all of his novellas, those lollipop sized servings of delicious plot and concepts that keep you engaged until you realize that you took the requisite three licks and chomped your way through to the end.  I consumed the previous installation of this series, Steelheart, with a singular focus that found me growing increasingly irritated with those elements of real life that got in my way of finishing the novel, those things like kids and, you know, work.

The first book, Steelheart, had every element of Sanderson’s unique take on a genre that definitely needed one.  Even though superheroes have become increasingly complex and interesting, especially as depicted by stronger and stronger directors in Hollywood, they are still very formulaic.  Sanderson breaks the formula, twists it around, adds his special brand of voodoo and puts you in an entirely unexpected place.  The joy of his world is that the only heroes in it are definitely not super.  While writing Firefight, Sanderson even did us all the wonderful favor of putting out a little ‘tweener novella, Mitosis, that kept the cravings going.

This made it all the more disappointing when I did finally dive into Firefight.  Don’t get me wrong, the book is still good, with Sanderson’s mastery of the language blazing through every page with a plot relentlessly getting the reader through to the thrilling climax.  But it’s not Sanderson good.

The main characters move location from the shiny Steel Chicago to an over-the-top, hippy version of New York that also happens to be mostly underwater.  This lends to some pretty cool visuals but ultimately becomes a little limiting in what the characters can accomplish and too often reminded me of that disaster of a Costner movie, Waterworld.   The reason for the shift becomes immediately apparent as the primary villain is a high epic with water powers.  It was she who flooded the place and she who sets the rules.

Our protaganist, with the newly minted moniker of Steelslayer, still uses his encyclopedic knowledge of Epics to formulate a plan with the rest of his team to do their very best to take down these over entitled super-pricks.  They even use new Epic charged toys to execute the plan.  What I found disappointing was that it was nothing extraordinarily new.  Even the big reveal at the end didn’t push the envelope to anything groundbreaking.  Sanderson has set the bar sooo high on all of his books that I’ve grown to expect something mind-blowingly new every time I read one of them that just getting a continuation of the previous installment felt like a letdown.  It almost felt like Sanderson himself got a little bored with the concept.  Pure conjecture on my part but I couldn’t still that niggling thought as I made my way through Firefight far slower than Steelheart.

Will I read the next and most likely final installment of the Reckoners series?  Absolutely.  Will I go into it with the same super high expectations I take into every Sanderson book.  Absolutely.  Here’s to hoping that he meets those expectations like he did with Mistborn and The Stormlight Archive.