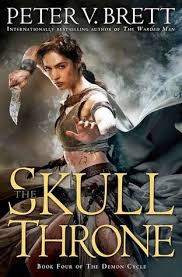 Every once in a while you run into a world that is so interesting that the world itself keeps you engrossed to the point that you will read anything placed in it.  This is true of Brett’s Demon Cycle series.  It requires a solid storyteller to get you so engaged but though he does a solid job of turning a phrase, that’s not what keeps you coming back.  It’s the amazing idea behind the world that is almost addicting in its ability to draw you in.  To paraphrase quickly here, all of our characters live in a world where demons rule the night.  Once the sun goes down, these demons start to materialize pretty much everywhere on the surface.  The only protection from these demons are magical wards that they cannot cross.  There is no way to harm these demons and if you are caught un-warded with them at night you’re pretty much screwed.  Our main characters spend their lives fighting against this nighttime slavery to the indoors in an effort to understand what they can do to change this fate.  Needless to say, they start to find ways to fight back and these techniques start to change these characters in fascinating ways.

This is the fourth book in the series and before this came out at the end of March I re-read the three that came before it and the short stories: Brayan’s Gold, Messenger’s Legacy, and The Great Bazaar and Other Short Stories.  I saw none of that as wasted time, that’s how compelling the idea of the world is.

Going to focus this review on the fourth book.  Like any good series, the third book ended with a cliffhanger, which was quite literal in this case.  Two of the main characters, the Warded Man and the Shar’Dama Ka face off in an epic fight to determine who will deliver the world from evil.  It doesn’t go well for one of them.  The story picks up shortly after that battle.

My biggest concern with the book is that it starts to introduce quite a few new characters.  This is always a red flag to me when the author starts to do this four books into the series.  Gives serious flashbacks to Jordan when he got muddled down with hundreds of characters that were so varied that you start to lose track of who they are or worse, why you should care about them.  Brett doesn’t go that far but it is still a little disconcerting.  There is a great cast of characters already, the new additions don’t seem to add much to the enjoyment of reading the books and they tend to just muddle the plot lines.  You can always tell when this is happening when you start confusing one character with another.  I started doing this with the fourth book and I read it on vacation pretty much straight through.

On the flip side, he takes a great turn for the better by starting to kill off some of the characters, including one of the main characters, R.R. Martin style.  This is a critical step in any great series because it shows that everything is on the table.  There are no Disney endings in this one.  Too many fantasy writers fall so in love with their main characters that you know that there is no chance that they will be killed off.  This makes the danger that they face less real and identifiable and ultimately kills a lot of good stories.  There needs to be that fear that somebody can actually die to bring real tension to a story.

My other gripe with this book was that the main story didn’t move forward much.  Our characters become more established and comfortable with their new powers but there was never that moment where they took the next big stride forward in the war.  They talked about it a lot, but it never actually came about.  This was Jordan-esque as well and just as disappointing as it was in his books.  When you read a 600+ page novel, you expect some level of a money-shot at the end.

Still very enjoyable and I will still be looking very forward to the next novel in the series but this is not his best work.