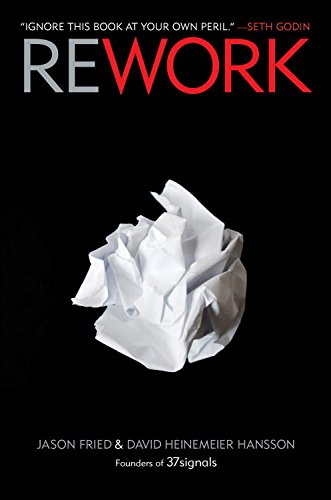 Rework is one of those books that is very easy to cast aside as an anti-establishment rant.  Do so at your peril.  Fried and Heinemeier Hansson have some strong, experienced based wisdom to impart.  You may not agree with all of it and they freely acknowledge that that is OK.  The book is heavily opinionated based on what has worked for them.  Opinionated in this case is good because those opinions are laden with passion.  These guys live their philosophy and they are unapologetic about doing so.  That alone makes Rework a refreshing read.

The book is short but packed with impact.  The authors are very concise and don’t waste your time with flowery prose.  They exemplify the ‘never use 10 words when 1 will do’ rule.  Their delivery is much more fortune cookie than Dickens which makes using the book for reference a lot easier.

The authors of Rework started 37Signals who are the creators of Basecamp.  For those not familiar, Basecamp is SaaS based project management software.  They were one of the early companies to come out with this style of collaborative software project management.  I like their blog a lot more than I like their software.  I’ve used Basecamp in the past and it never really did it for me.  To be fair, I haven’t used the software in years and my experience is in creating products for the market and not for managing projects for specific customers.  Their software seems to be more tailored for the latter approach (or at least it was when I used it.)

So let’s dive into the wisdom they have to impart.  They start by trying to dispel common misconceptions about business.  They started off with one that actually pissed me off a little: ‘Learning from mistakes is overrated.’  Their point was that you learn a lot more from success and that failure is not a prerequisite for success.  However, by saying something like that they are not attributing any of their own success to luck of being in the right place at the right time.  There’s a reason that only 5% of startups survive even if you do follow these principles.  And luck plays a big part in that reason.  It’s almost like blaming a cancer patient for getting cancer.  In my opinion, you should learn from everything, both your successes and your failures.  I did agree with most of their other points though.  The next being that planning is guessing.  Their comment was that ‘writing a plan makes you feel in control of things you can’t actually control.’  This has a lot of merit when coupled with their idea that it is ‘ok to wing it.’  I think there can be benefits to a plan when it makes you think through all possibilities before investing a ton of money in something.  But you can definitely wing it with smaller decisions especially if you are getting feedback from the market early and often.

I really did like their piece on workaholism.  I don’t know when workaholics became heroes in our society.  I agree with our authors that say, “Not only is this workaholism unnecessary, it’s stupid. Working more doesn’t mean you care more or get more done.  It just means you work more….Workaholics miss the point, too.  They try to fix problems by throwing sheer hours at them.  They try to make up for intellectual laziness with brute force.  This results in inelegant solutions.  They even create crises.  They don’t look for ways to be more efficient because they actually like working overtime.  They enjoy feeling like heroes.  They create problems just so they can get off on working more.”  Couldn’t have said it better myself.  When a company needs heroics, you’re doing it wrong.  “Workaholics aren’t heroes.  They don’t save the day, they just use it up.  The real hero is already home because she figured out a faster way to get things done.”

I’ve already touched on this but the authors strongly advocate for strong opinions.  It’s ok to piss people off.  “If no one’s upset by what you’re saying, you’re probably not pushing hard enough.”  With strong opinions come passion.  With passion comes movement.  They also debunk the idea of starting a company with an exit strategy in mind.  “You need a commitment strategy, not an exit strategy.  You should be thinking about how to make your project grow and succeed not how you’re going to jump ship.  If your whole strategy is based on leaving, chances are you won’t get far in the first place.”

I really liked their thoughts on cutting stuff to it’s core.  This is the philosophy of the MVP.  In their words, “So sacrifice some of your darling for the greater good.  Cut your ambition in half.  You’re better off with a kick-ass half than a half-assed whole.”  Cutting down to that level is tough.  They have some advice here too, “The stuff you have to do is where you should begin.  Start at the epicenter.  The way to find the epicenter is to ask yourself this question” ‘If I took this away, would what I’m selling still exist?” A hot dog stand isn’t a hot dog stand without the hot dogs.”

Another important part about being an entrepreneur is making decisions and keeping those decisions and your projects short and sweet.  “When you get in that flow of making decisions after decision, you build momentum and boost morale.  Decisions are progress.”  And, “long projects zap morale.  The longer it takes to develop, the less likely it is to launch.  Make the call, make progress, and get something out now”

They take a programmer’s approach to estimates and solving problems.  I really like this quote because it is something I have found to be true again and again.  “Your estimates suck.  We’re all terrible estimators.  We think we can guess how long something will take, when we really have no idea.  We see everything going according to a best-case scenario, without the delays that inevitably pop up.  Reality never sticks to best-case scenarios.”  This is also a truth I have found to be universal, “Whenever you can, divide problems into smaller and smaller pieces until you’re able to deal with them completely and quickly.  Simply rearranging your tasks this way can have an amazing impact on your productivity and motivation.”

They caution not to fear competition.  In my experience, having competition is far better than not having any.  When you don’t have a competitor you have to define your space which is incredibly difficult.  “Having an enemy gives you a great story to tell customers, too.  Taking a stand always stands out.  People get stoked by conflict.  They take sides.  Passions are ignited.  And that’s a good way to get people to take notice.”

They also dive into the power of No.  “Start getting into the habit of saying no-even to many of your best ideas.  Use the power of no to get your priorities straight.  You rarely regret saying no.  But you often wind up regretting saying yes.”  It’s hard to give up on good ideas but, “The enthusiasm you have for a new idea is not an accurate indicator of its true worth.  What seems like a sure-fire hit right now often gets downgraded to just a ‘nice to have’ by morning.  And ‘nice to have’ isn’t worth putting everything else on hold.”

They have some really good ideas on promotion.  They go deep into building an audience so that, “when you need to get the word out, the right people are already listening.”  Educating that audience is also a good way to get out there, “Instead of trying to outspend, outsell, or outsponsor competitors, try to out-teach them.  Teaching probably isn’t something your competitors are even thinking about.  Most businesses focus on selling or servicing, but teaching never even occurs to them.”  They are also big proponents of transparency.  Share your experiences with your customers.  “Letting people behind the curtain changes your relationship with them.  They’ll feel a bond with you and see you as a human beings instead of a faceless company.”

Their thoughts on hiring are very entrepreneurial and I don’t know if I agree with all of them.  They claim to “never hire anyone to do a job until you’ve tried to do it yourself first.  That way, you’ll understand the nature of the work.  You’ll know what a job well done looks like.”  My caveat to this would be, don’t do those jobs for long especially if you don’t like them and aren’t very good at them.  I know I’m not a great marketer because it pains me to do it and I know a lot of really good marketers that can do the job better than me.  But their point is valid because I didn’t know that until I tried it first.  I also liked their comments on how to narrow it down between several finalists.  “If you are trying to decide among a few people to fill a position, hire the best writer.  It doesn’t matter if that person is a marketer, salesperson, designer, programmer, or whatever, their writing skills will pay off.  That’s because being a good writer is about more than writing.  Clear writing is a sing of clear thinking.  Great writers know how to communicate.”

They also have some interesting thoughts on damage control and culture but I don’t think there was anything new there.  Overall, it is worth the read.  It’s quick and it hits a cord.